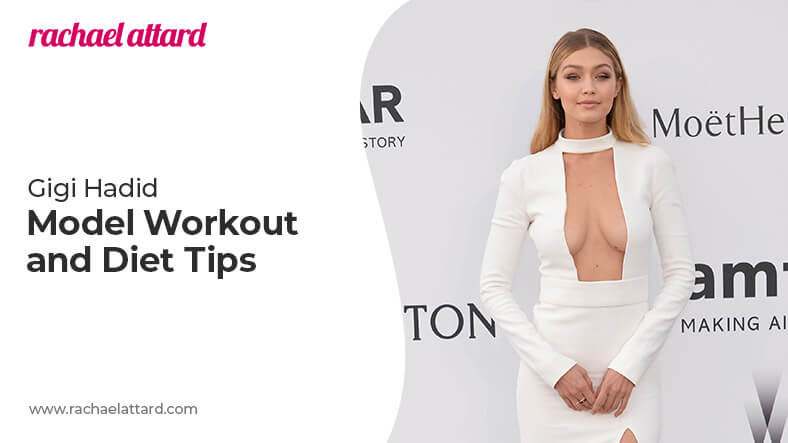 In this blog post, we’ll look at how Victoria’s Secret model, Gigi Hadid, keeps her body healthy and beautiful! Gigi is just one of the many models! Learn about how the rest of Secret models prepare for the show here.

Gigi has always prioritized fitness. In fact, as a child, she played volleyball and competed in horseback riding. She even qualified for the Junior Olympics!

I love knowing that so many of the women we consider to be so sexy are also so athletic and strong!  “Being an athlete was such a big part of me being proud of myself and my skin. My coaches didn’t care about how I looked, they cared about me because I was a good teammate, a good friend and those were the things that helped me feel strong,” Gigi said in an interview to Elle Magazine.

HOW GIGI SLIMMED DOWN HER LEGS

When Gigi decided she wanted to start modelling, she actually had to slim down. This might sound familiar to some of you! Gigi’s years of athleticism had made her strong, but her legs were bulkier than she wanted. She slimmed down while maintaining her strength, which is something I always promote.

Gigi and her trainer, Rob Piela, worked together to help her slim down in a healthy way. Gigi follows a pretty strict regimen, but she makes sure to listen to her body too.

You see, Gigi is a mesomorph body type which means she’s naturally quite athletic and she can build muscle very easily. If the same thing happens to you, especially in your lower body, you might also be a mesomorph.

Want to know the secret to Gigi’s arm and upper body workouts? She boxes! According to her trainer and even her Instagram posts, Gigi loves boxing and uses it as the base for a lot of her training!

Boxing is a great way to work out your whole body, especially your arms, and it is a cardio exercise too. I also love boxing, and I recommend that you try it if your gym offers it. In fact, Gigi isn’t the only model who loves to box. Kelly Gales is another fan of the sport, and Adriana Lima says it helps to get tone without creating bulk! If you’re looking to get model-like arms, try this lean arms workout.

HOW GIGI TRAINS HER ABS

Gigi’s trainer Rob Piela says that getting abs like Gigi is really a matter of doing planks, crunches, and leg raises. For example, after doing a cardio warm-up, he recommends doing twenty bicycle crunches in a row. If that doesn’t make you tired, do enough to feel the burn.

To see ab definition, your body needs a combination of body fat percentage (which comes from burning more calories than you’re eating) and the actual muscle definition (which comes from ab (plus other) workouts). Gigi does both. She burns calories through boxing and other cardio, then she works out her core. If you want a similar ab exercise plan to Gigi’s, do the following:

Repeat this 4 times with a different ab strengthening move each time. Finish it all off with a plank!

To keep her signature long legs lean and her butt perky, Gigi makes sure to work out her lower body too! Once again, Gigi uses a lot of cardio moves to keep her body slim and her legs toned. She incorporates boxing, running, jumping rope, and other cardio moves with strength training to create HIIT workouts.

Rob Piela gave Self Magazine a sample workout that alternates between three minutes of cardio and one minute of a strength training move. You can try the workout for yourself here, or you can try out a similar lower body circuit workout that I do! Gigi does a lot of squat variations and donkey kicks to keep her butt toned.

In one interview, Gigi said her personal motto is to “Eat clean to stay fit, have a burger to stay sane.” And the model follows through with this.

She doesn’t stick to one specific type of diet; instead, she focuses on eating well-made, whole foods. Gigi eats lots of fruits and vegetables, meat, eggs, milk, and flour. She enjoys food that is organic and keeps her feeling full. Even her trainer encourages her to stick to a healthy, but not extreme, diet. He says that what you eat plays a big role in if your abs will show through or not.

Other Victoria’s Secret models follow their own diet variations. Most eat mainly vegetables and lean protein.

SOME OTHER TIPS FROM GIGI

SHE’S ALL ABOUT THE HEALTH THAT GOES BEYOND THE PHYSICAL

Gigi obviously dedicates a large portion of her life to fitness and health. She eats well, she exercises hard, and the results are evident! But Gigi isn’t just about looking good. She advocates becoming the best version of yourself physically, emotionally, and mentally!

SHE WORKS OUR WHILE TRAVELLING

One of the hardest parts of fitness, especially for new girls, is keeping consistent. Gigi follows her workouts even when she’s away from the gym! In fact, she even calls her trainer when she’s travelling!

AND SHE ENJOYS WHAT SHE EATS

Gigi understands that to keep a healthy diet, we need to enjoy her food. She doesn’t eat things that she hates. Instead, she finds healthy recipes and restaurants that serve meals that she enjoys. This is the best way to stick to healthy eating over a long period!

Did anything surprise you about Gigi’s fitness regime? Does she do anything that you think you’d love to try?

I have written separate blog posts on lower body, upper body and ab workout routines that the Victoria’s Secret models use (with lots of cool workout videos!). Also, I have done a post on their diet. And for this year’s show, I’ve done blog posts for a couple of VS gorgeous models. You can read these blog posts below!

And I have some workouts for you here.