Living with Body Dysmorphia and Its Effects 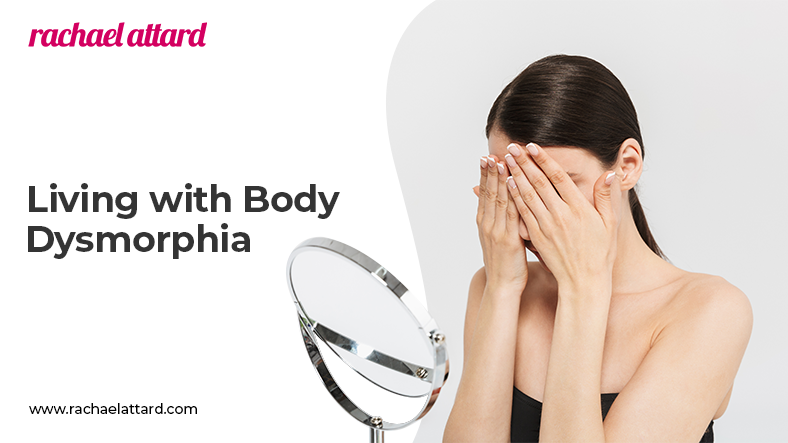 Many women struggle with the way they look, what they eat, and even how they work out. I hear this sentiment regularly from my friends, the women I meet in person, and from many of you online!

Because of this, I want to take some time to address these struggles seriously. Thanks to many of you, this is a supportive community of women, where you won’t be judged! Instead, I hope that you all can feel empowered to take charge of your physical and mental health at the right pace for you!

In this article, I’ll spend some time explaining more about body dysmorphia, the symptoms of it, what causes it, and how you can seek help. I’ll also explain some of the differences between body dysmorphia and general body insecurity.

What Is Body Dysmorphia?

Most of us have insecurities or have had them at one point or another. Some people are insecure about their skin, their nose, the shape of their body, or even the colour of their hair. Having insecurities is a common part of the human experience and is considered to be normal behaviour in most cultures.

However, some people feel overwhelmed by their insecurities. They think about them all the time, and they imagine that other people are constantly noticing their perceived flaws too. They fixate on their insecurities, and they experience self-hatred and shame about the way that they look.

When these insecurities and feelings become all-consuming, cause emotional distress, and/or impact a person’s daily life, this is considered body dysmorphia. People with body dysmorphic disorder (or BDD for short) engage in compulsive behaviours too. For example, they might sneak a peek at themselves in every mirror they pass in an attempt to check in on their appearance. Typically, people with body dysmorphia fixate on one or two body parts, such as their acne and hair.

RELATED POST: How to Have a Healthy Relationship With Food

Body dysmorphia is common, but it often goes undiagnosed. Many people feel embarrassed or ashamed to bring up their feelings to their counsellor or doctor. For example, in one study, only about 15 percent of patients brought up their body image concerns with their psychiatrist. Most were too embarrassed to share their worries.

Body dysmorphia affects men, women, and children. In fact, mental health practitioners have seen kids as young as 5 and adults as old as 80 struggle with this condition. However, BDD is most likely to affect people aged 15 to 30. Some studies suggest that women are more likely to experience BDD, but others say that men and women are just as likely to experience this.

Mental health practitioners use the following criteria from the Diagnostic and Statistical Manual – Fifth Edition (DSM-5) to diagnose somebody with BDD:

Researchers are still trying to understand body dysmorphia and what causes it.

Although people of all ages experience body dysmorphia, it typically begins in the teenage years. Because of this, many mental health experts believe the physical changes and hormone changes that occur during the teen years can contribute to BDD.

In addition to age, researchers think that body dysmorphia can be caused by:

Growing up with a parent or caregiver who really values physical appearance or diet can also increase a person’s risk for developing body dysmorphia.

Some researchers believe that BDD has a genetic component to it. About 8 percent of people with BDD have a first-degree family member with BDD, which is 3-8 times higher than the general population. People with BDD are also more likely to have a family member with obsessive-compulsive disorder, suggesting there might be a relationship between BDD and OCD.

Twin studies also suggest that genetics play a partial role in developing BDD. However, no studies have been done to see if any specific genes put people at greater risk.

People around the world experience BDD. For example, people from the USA and Germany are just as likely to experience BDD. Sometimes, differences in cultural beauty ideals mean that the types of fixations people develop are different between countries or cultures.

Some believe that people with body dysmorphia have visual processing issues related to their perception. For example, in one study in which different people were asked to draw on a piece of paper, people with BDD were more likely to focus on the accuracy of specific body parts. They were also more likely to see distortions in their drawing than other participants were.

In addition to this, studies have found that people with BDD have lower levels of serotonin in general. However, more work needs to be done to understand the relationship between body dysmorphia and serotonin.

Treating body dysmorphia is very important! It can help those with body dysmorphia achieve a better quality of life, making them feel less anxious and more able to engage in their relationships and responsibilities. That’s something everybody deserves! :)

CBT is all about helping a person change their thoughts and beliefs so that their behavior can change too. Therapists use CBT to help their patients understand why they think the way they do, so they can evaluate their negative thoughts. In CBT, people are encouraged to notice their negative thoughts and develop strategies to think more realistically about themselves.

When a patient has body dysmorphia, therapists use CBT to help the person improve their self-esteem, self-worth, perception of self, and identity. A therapist will also help their patient develop strategies to resist their urges, like obsessively checking in the mirror.

SSRIs are a type of anti-depressant medication, and they are often prescribed as a form of treatment for BDD. Most patients with BDD who are on SSRIs experience some relief from their symptoms.

The official criteria for BDD states that a person can be diagnosed with BDD if they are worried about their weight and body fat, so long as an eating disorder diagnosis isn’t more appropriate.

Some have wondered if anorexia could be a form of BDD because of their overlap. However, according to one study, the two have some very important differences, specifically when it comes to different treatments. That’s why it’s important to keep them separate since it’s possible for people to have both an ED and a BDD.

How Can I Tell if I Have Body Dysmorphia or if I’m Just Unhappy With a Part of My Body?

Most people want to change something or somethings about their body! None of us feel like we have the “perfect” body or face. Feeling unsatisfied or insecure about your body is a common part of being a person, and it might be worth talking to a mental health professional or even a trusted loved one about your insecurities no matter what. :)

If your insecurities don’t get in the way of your day-to-day life much or they don’t cause you extreme distress or anxiety, then you might not have BDD.

If you worry that you are too fat, you might be experiencing an eating disorder, instead of BDD. Consider talking to mental health expert or your doctor about your concerns so that you can receive treatment that best meets your needs.

Body dysmorphic disorder is a serious condition that severely impacts a person’s well-being and general happiness in life. If you believe you are struggling with body dysmorphia, don’t be afraid to seek help.

2 comments on “Living with Body Dysmorphia and Its Effects”