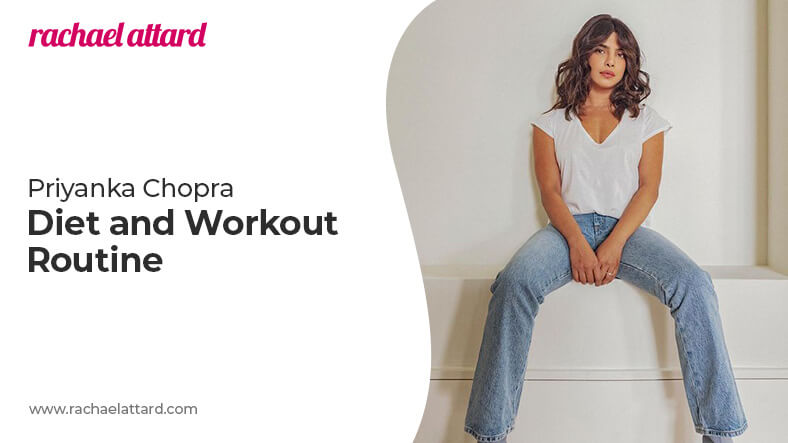 Only one person can claim the title of Miss World while also becoming one of the most successful actresses both in Bollywood and Hollywood. Priyanka Chopra is it. And it’s no surprise why.

She’s crazy talented as an actress, dancer, and performer.

Though her body is amazing, and her energy levels are seemingly endless when she’s on shoots, her diet and workout routine are a lot less strict than you might think. Let’s take a look at what she does to keep herself looking beauty-pageant ready well into her late 30s.

Priyanka doesn’t follow a vegetarian diet protocol. She tried being a vegetarian for a bit but it didn’t work out for her. So instead, she focuses on eating as healthy as she can, as often as she can with whatever foods sound good at the time.

She tries to avoid processed and junk foods most days, instead focusing on tons of fresh fruit, vegetables, and lean proteins. For her, the thought of keeping a strict diet is too restrictive. It doesn’t help her feel her best and leaves her feeling more insecure about her body than she’d like.

So, instead, like she told Elle, “she does it by the seat of her pants” and does what makes her feel good.

RELATED POST: Is the Vegan Diet Good for Weight Loss

When she’s trying to get back into better shape, her breakfasts are fairly simple. She starts things off with a large cup of coffee to help her wake up. Then, she’ll grab a piece of avocado toast or whip up a quick omelet.

If she’s at home in India, she’ll grab more traditional fare. Things like dosa or idli (think savory pancakes made from rice and lentils) are on the menu.

Other days, she’ll skip breakfast altogether. She’s not much of a morning person, and so as long as she gets her caffeine fix, she’s generally good to go.

When she’s busy filming, Priyanka will grab a salad for lunch. It gives her a healthy dose of nutrient-dense foods to help her keep up with the rest of her day.

The type of salad she grabs largely depends on where she is. If she’s state-side, she’ll add some smoked salmon or lean turkey breast to the mix. But if she’s in India, she’ll grab whatever seasonal veggies she can find, some dal (for added protein), aloo gobi, and a side of roti.

The roti is a simple flatbread that’s common in most Indian cuisine. Someone who’s goal is fat loss should be careful when eating roti since it’s packed full of carbs. If you want something similar without the hefty carb content, I recommend these low-carb tortillas.

For dinner, if she feels like cooking, she might whip up some grilled chicken served with seasonal veggies. And if she’s feeling homesick, she’ll usually incorporate tons of spice-heavy dishes involving lentils, beans, and other high-protein, high-fiber ingredients.

However, she will also let herself indulge in some cheeseburgers, pizza or buffalo wings.

Priyanka doesn’t believe in actively eliminating or avoiding certain foods. For her, it’s all about balance and indulging cravings in moderation.

That said, she does try to avoid oily or fried foods when she can. And she actively looks for ways to avoid processed ingredients and foods that aren’t nutritionally dense.

Though she’s generally good about eating healthy, she does have a sweet tooth and loves the standard burger and fries combo. She’s a huge fan of pizza, burgers, wings, and even donuts.

For her it’s important to take care and eat those indulgent treats somewhat sparingly.

Priyanka attributes her ability to indulge whenever she wants to her naturally high metabolism. That high metabolism may help her avoid putting on weight, but it’s not enough to help her stay healthy.

That’s why she tries to eat as healthy as she can, as often as she can.

She also makes sure to stay hydrated, drinking at least ten cups of water and more. Her favourite drinks are coconut water, red wine and peach iced tea.

Since her diet is relatively flexible, the bulk of her supermodel-like looks are maintained with regular exercise. But even while exercising, she doesn’t overdo it. For Priyanka, exercise is a way to relax and help her body feel like it’s working at its best.

Another reason why she has to stay fit and agile is that she does her own stunts, which I think is amazing! She needs to be at her best to avoid risk of an injury.

That’s why she tries to get at least a small workout in at least four days a week. The exact workouts she does vary from day to day and largely depend on how much time she has to spend getting her sweat on.

For cardio, Priyanka’s routines tend to change by the day. If she’s going to the gym, she’ll hop on the treadmill for 15 to 20 minutes and get a solid cardio workout in. If she’s planning on staying around the house, she’ll go for a run outdoors.

She’s also a huge fan of spin classes and swimming when she gets the chance. Both workouts get her heart rate up and challenge her muscles.

Though cardio and traditional strength training sessions are things she enjoys, Priyanka loves to run through yoga routines each day.

The workouts challenge each muscle group and put them through their full range of motion every time while also helping her regain focus and boost her mental health. This helps Priyanka maintain her flexibility, but it most importantly helps her build strength and tone.

Remember, yoga is a bodyweight workout. These routines are the most effective for women who want to avoid building tons of bulky muscle but still want to get toned and lean.

She has a few favourite poses that she incorporates into her yoga flows each time. These are the ones she prioritizes every time:

These moves help lengthen the muscles in her back while also helping her build core strength with each movement.

Most of her incredible toning comes from her regular yoga practice. But that doesn’t mean she’s afraid to lift weights or get some serious bodyweight exercises in when she’s at the gym.

Her regular strength training routine is usually combined with a bit of cardio or incorporated into a HIIT routine like this one. The main strength exercises she does include the following:

The one thing she tries to remember when she’s working out, whether it’s for maintenance or to get ready for a film is that her goal is to feel good, not to lose weight.

For Priyanka, balance is the most important. Her goal is to stay fit and healthy, especially for all of those stunts she needs to do.

Her diet isn’t too restrictive and she goes by however she feels. So if she feels uncomfortable with her body, she will work hard to make herself feel better. She listens to her body, notices all of the changes and adjusts her routine accordingly, and I like that.