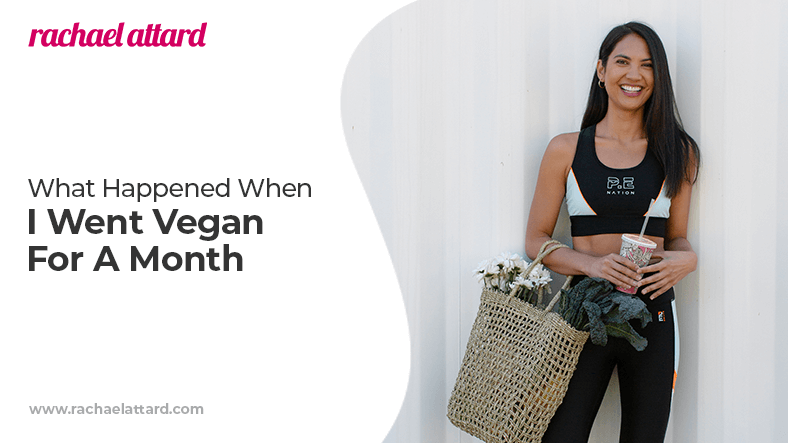 I decided to try the vegan diet for 1 month for one main reason.

As you might know, I have been experiencing problems with all of my hormones (thyroid, cortisol, aldosterone, estrogen, progesterone). A lot of these hormonal imbalances are then causing issues with my menstrual cycle, energy, weight, puffy face, acne, etc.

My main goal was to try and find out if the vegan diet could help me improve all of these symptoms and balance out my hormones!

I know there are a lot of benefits for animals and our planet by eating vegan so that is also a huge bonus! But it really wasn’t the main factor for me.

So I’ll tell you about all of the changes I experienced (good and bad), and also tell you what I have actually been eating as a new vegan. This is what happened when I went vegan for a month!

In the first week, my diet was a bit all over the place as I was still finding out how to eat vegan properly. I was under eating fruit and veg and feeling hungry so filling up with high fat foods like nuts, which is a common mistake for new vegans.

Towards the end of the week I started feeling really tired so I decreased fats and increased my portion sizes and added quinoa and rice to some meals. It didn’t make much difference to how tired I felt.

I was super tired at the start of the week. It started getting better towards the end of the week though.

Another bad side effect was that I started feeling constantly bloated! It was so bad it looked like I was 3 months pregnant and it just wouldn’t go away! I realized the bloating was worse when I ate lentils so I cut them out and after a few days it started to improve. By the end of the second week, most bloating had gone.

I actually enjoy vegetables a lot more now! I have been eating lots of roast vegetables every day (red peppers, mushrooms, broccoli, pumpkin, potato, beetroot) and they are sooo tasty.

I’ve heard of people saying that their taste buds change when they turn vegan and I thought that sounded like a whole lot of BS. But I think that could be what happened to me.I’ve never loved vegetables like this before! But it could be that I am just getting better at cooking haha.

All of the bloating has completely gone. I’m not feeling really tired like I was at the start of the week. Overall my energy actually seems to be improving now, which is great!

I’ve always had a lot of trouble getting out of bed in the morning due to my low cortisol levels but it’s getting easier and easier.

Also, I’ve started going to the toilet twice per day now. Sorry if that’s too much information!

My skin seems to be clearing up! It’s not perfect but I’d say at least a 50% improvement. It’s also usually a lot worse around my menstrual cycle. I’m approaching my menstrual cycle (I think) and my skin hasn’t been breaking out like it usually does.

Also, I usually get extra hungry and have bad chocolate cravings around my cycle and haven’t been having those either!

Last month (before I tried the vegan diet) my period finally got to a 32 day cycle after being all over the place. But this month with a vegan diet, I am on day 34 with no period yet. So not sure what is happening there. But my cycle hasn’t been regular since coming off the contraceptive pill 1 year ago so I’m sure it is still figuring itself out!

Overall, I have lost no weight. However, I do feel like I have been eating more than normal. So I’m not complaining! Also, I haven’t really been perfect with my eating.

I still eat typical junk food like chocolate and sometimes I had cheese (if at a restaurant). I will always try to choose vegan food at a restaurant but sometimes it’s really when travelling. I didn’t eat any meat but did eat a little bit of dairy.

Also, I know that vegan doesn’t necessarily mean healthy as sugar is still vegan. You can definitely be an unhealthy vegan. So I’m always mindful of this!

I am really happy with the changes I’ve experienced so far, and I’m going to continue with the vegan diet so far.

I’ve also done a lot of research over the past month regarding the impact that animal meat and fat has on your health, and I think I will find it very difficult going back to eating animal protein after what I have learned.

WHAT DID I ACTUALLY EAT AS A VEGAN?

In the first week, I did find it a little hard to get into a good eating routine. But I think I’ve perfected it. It’s actually quite easy for me now. The only challenge is finding vegan food at restaurants.

Also, just want to mention that I’m not eating gluten at the moment, because it’s recommended to avoid gluten if you have thyroid issues.

This is what I typically eat in a day:

I find it easier if I eat similar foods every day so I will usually stick to this (when I am at home). The only thing that really changes are the vegetables that I use and the meal I make for dinner.

I am not counting calories, but I just wanted to check that I was eating the right amount of calories and getting all the proper nutrients.

I put all of my food into the app myfitnesspal to check. I am eating about 1400 calories (I’m not really exercising at the moment so that’s why it’s a bit lower than normal). And my macros are:

I’m happy with these macros and the level of protein. I am also eating 27g of fibre (the minimum is about 22g for females), so that’s great! Not many people eat the recommended 22g of fibre.

According to myfitnesspal, I’m also exceeding the iron intake by almost double. I know a lot of people worry that you don’t get enough iron on a vegan diet, and I was also concerned about this. But looks like I am getting enough, which I’m really happy about :)

I will do another update after my second month of following the vegan diet if I continue to notice changes. Fingers crossed my hormones continue to improve!

I would love to hear from anyone else who has tried or is considering trying the vegan diet?! It’s still such a new world to me xx

I should also mention that my 3 Steps to Lean Legs program now also has a Vegan Meal Plan! Sooo many of you guys have asked me about eating vegan while doing my program so I wanted to give you a complete vegan nutrition plan :)

I’ve worked really hard on this meal plan and I really hope you guys are going to like it! :) 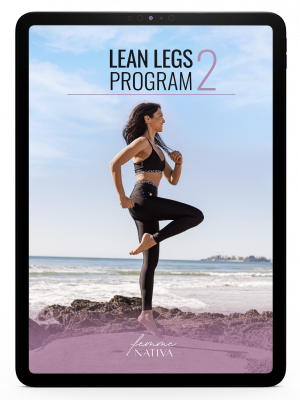